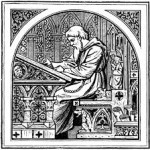 I see writing as the stringing together of a series of scenes in which characters develop, actions develop and finally stories develop. When I have a very rough picture of what the scene is, I physically transport myself to the center of the scene, stand there and do a slow three-sixty and take in as much as I can.

I don’t always see everything in that first three-sixty, so I stop as often as I need, and take as many three-sixtys as I need to get the entire picture. Example: My character is a smart eight year old girl, from a wealthy family, with a strong background in ballet. She has been kidnapped but has found a way to escape. It’s four thirty in the morning, dark, and she is on the second floor of a three story walk-up in Bedford-Stuyvesant, New York. She escapes her captor, runs out the apartment door and finds herself at the top of a stairway which begins the path of her escape, a path neither she nor I  have seen before.

What do the stairs look like? I see dingy walls and stairs, poorly lighted, narrow, I don’t have a lot of time to look, she’s running. She is sure footed, a ballet dancer, and nimbly descends. She realizes that she may have to tell police where she had been, so she looks up and sees the street number, backwards, painted on the transom above the door. 08632 etches into her memory. She throws open the door and runs down the ten, brownstone steps to the sidewalk.

Once on the sidewalk she stops, does a one-eighty, trying to decide which direction to run. Other than street lights and traffic lights, she sees a single store front light four blocks away. She runs toward the light she thinks might help her. “Where am I?” She asks herself. As she crosses the first intersection, she looks up and sees that she is on Madison Street.

Now all she can think of is running as fast as she can and the light, now three blocks away. She concentrates only on the light and the sidewalk beneath her feet. As she nears the light she can make out a sign which is printed in a strange language. When she arrives she sees it is an Asian, mom- and-pop grocery store, a little man inside preparing for the day.

That was my first run through the scene. Whats missing? Other people? Probably not many if any at four thirty in the morning. Trees? Garbage Cans? Passing cars? Not important. I think, however, I’m going to have her deftly, ballet leap over a bum sprawled on the sidewalk near her destination. I love writing.

“Baseball is 90% mental, the other half is physical.”  Goodbye Yogi, and thanks. 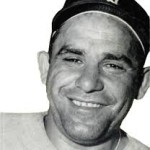 Yesterday we lost Yogi Berra. I have never been a real big baseball fan, but I have always been a Yogi fan. Each week I have tried to close the week with a Yogiism to lighten the weekend just a bit. “It’s amazing how much you can observe by just watching,” or “It aint over til it’s over,” or “When you come to a fork in the road, take it,” or the all-timer, “Always go to other peoples funerals, otherwise they won’t come to yours.”

When you chew on them, roll them around in your mouth, say them aloud a few times, you know what he was trying to say, and you see the sageness in his sayings.

Goodbye Yogi, I’ll miss you, and I will continue to post your quotes to continue to lighten our times as you have done so well for me. “It ain’t over til it’s over.”

The Silent Generation, “The Lucky Few” were born between 1929 and 1945. The generation was ushered in on the wings of the collapse of the stockmarket and the ensuing Great Depression Era. The generation began its working life on the jubilation of the end of World War Two. Only forty milllion souls were born during that time. In the first half everyone was afraid to have children during the depression, and in the second half, all of the men were overseas fighting the axis of evil.

What happened is illustrated in the graph above (click on it for a better view). Less people were born in this generation than the generation previous and the generations following. Though is isn’t grossly apparent, the irony is that ‘The Lucky Few” enjoyed the most prosperity, the highest level of education, the widest levels of career opportunities, the least amount of war anxiety and the finest retirement.

Prosperity and Career opportunity. “The Lucky Few” had the most job opportunities and the least amount of people to fill them. Their services were sought after and their salaries and benefits were substantial.

Education. The majority of this generation was born on the farm, and left to seek a better life. More “Lucky Few” sought higher education than the generations before them, and set the standard for the generations that followed.

War anxiety. The fighting age is considered to be between 18 and 24 years of age. WWII had ended by the time the Lucky Few reached eighteen. They were ripe for the Korean War, however, at age twenty one, but it was a short war, not claiming a lot of American lives, less than 37,000, ten percent of which died from other than battle wounds.

Retirement. Because there were more jobs and careers than “Lucky Few” to fill them they were offered retirement packages, they purchased IRA’s, and FDR wanted them to have Socially Secured Golden Years.

We don’t really know anything about a generation until it has been lived. Born in 1937 and living the life of a “Lucky Few”, however, I always knew that I was living America’s Golden Age.