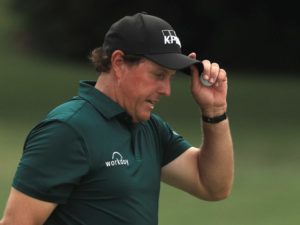 I’d like to explain excellence to you, because obviously you have no idea of its meaning. Sports professionals are measureded by their statistics, or the feats they have accomplished thus far in their careers. Phil Mickelson has won 43 times on tour; he has 3 Masters Green Jackets (one of 16 professionals to ever have accomplished that); 1 PGA; 1 Open; 16 times runner-up at the US Open; 700 weeks (13.5 years) in the top 10; and World Golf Hall of Famer. His 34 plus years; 26 Professional, plus University and High School; in golf uniquely qualify him as far a knowledge, capability and commitment to the sport are concerned.  He has the respect of his peers (of which Joe Buck you are not one), he has the love of golf fans in the galleries that follow him all over  the world, he has the trust and respect of his demanding long-time sponsors like Rolex, Workaday, Callaway, Titleist, Barclays and Ford. I think one would conclude from that resumé, Phil knows what he is doing on a golf course and understands the importance of maintaining high standards.

Yesterday at the US Open, on the thirteenth hole Phil saw a losing battle with his putter, and with split-second decisiveness, decided to out-sprint a runaway missed putt and backhand it on the fly, fully aware that he would incur a 2 stroke penalty. The smile to “Beef” was a knowing one, not a sign of disrespect for the game.

Joe Buck, a career sportscaster, with a controvercial background, with known disrespect for his colorists, decided in his infinite lack of wisdom to lable Phil a paraiah, disrespectful of not only the course and the Open, but of his livelehood as well. Wake up Joe Buck, and show some respect for the hard working professionals you sportscast. You and your twin Jim Nance need a long hard lesson in humility, or is that not a word in your vocabulary.