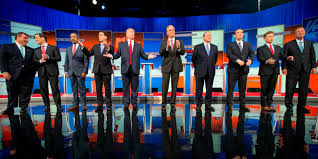 Any one of the 10 men standing on this stage would make a 10 timess better President than any the Democrats have to offer. These men are all basically honest, hard working, without a scandle rap-sheets and have made differences in the world.

The Democratic candidates are Barack Obama’s third term. It is actually very difficult for me to write that, because I am terrified we won’t make it to January 2017, nearly a full year away; let alone suffer four more years of political terror. 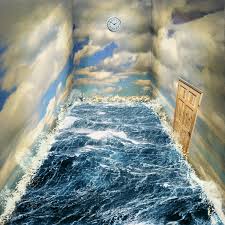 The two words that I would like to see stricken from our vocabulary are LIKE and SURREAL. LIKE is defined as ‘similar to’, ‘in the same way’, ‘the same kind’. SURREAL is defined as ‘bizarre’, ‘unusual’, ‘unearthly’ or ‘dreamlike’.

Here is how the words are used today. Someone asks someone else how they would describe an event that they had just witnessed, and the answer comes back something like this. 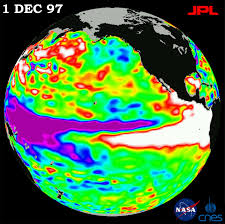 The other night on NBC News (An oxy-moron, BTW) a prominent weather newscaster made the statement, “El Nino disrupts normal weather patterns“. Now just think about that for a moment. El Nino is as normal as the Earth is, as Mom’s Apple Pie is, as Sun-up and Sun-down are. So how can it disrupt normal weather patterns? Geeze that’s like saying Blinking disrupts my normal vision.

Nobody said you were going to get smart watching TV , so why am I concerned what they say anyway? 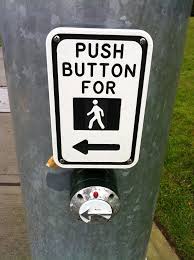 I always get a kick out of watching people pushing the crossing button at a lighted intersection. The idea of a button is to alert the system that there is a pedestrian wanting to cross and to allow the proper amount of time to cross, and show the proper lights.

The fellow that goes up to the button and presses it once knows how the system works.

The fellow that goes up to the button and presses it fifteen times is trying to tell the system that there are fifteen people waiting, so change the lights faster so they all can get across.

It takes all kinds to press the button, but it only takes one press. LOL 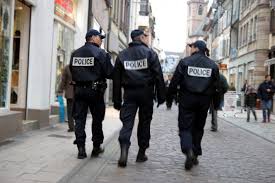 There is nothing in the laws of the land, in recruitment documents, in employment packages, anywhere at all that says a member of the Military or Law Enforcement is required to take a bullet. Protect and Serve are the only two written demands placed upon our men and women in uniform who stand in the front lines every day, whether it be a city street, or the Normandy Beaches.

We have read so much recently about “Bad Cops” who are shooting first and asking questions later; or “Shoddy Law Enforcement”, or “Friendly Fire”. We see a trend where Politicians are getting on band wagons to limit the activities of the Police and our Service men being severely hamstrung by so called “Rules of Engagement”.

Visualize yourself, proudly, in your police uniform or your military uniform being told to go out and stop a public disturbance, or calm a domestic violence situation, or coral some nut job(s) shooting people with an AR15 in a school, or a movie theater, or a church, or a Terrorist on a San Bernardino street or to put an end to our enemies aggression. You walk into the situation and the perpetrator points at you with something you aren’t sure what. Are you going to say, “Excuse me, is that a gun, or a cell phone you have pointing at me?” Hell no you are not going to say that, you are going to shoot and hopefully shoot straight and first.

The tamers of the Wild West, the Yankees, the Doughboys, the GI’s, the Gulf War Soldiers all were successful because they shot first or faster than the other guy. George Patton said it best when giving a pep speech to his beloved Third Army. “You don’t want to die for your Country, let the other poor bastard die for his country. Wade into them, grease your tank treads with them.” (After all the enemy or the perpetrator is why you are there in the first place, you didn’t go spoiling for the encounter. And the same thing goes for the Cop on the beat.)

My concern is that the Political forces at work will constrain our police and military to the point that no one will want to serve any longer. Already we see police opting out of the forces, and a slowdown in military enlistments. When and if it comes to a point where this great country can no longer defend it’s freedom from enemies from within or without, we will have anarchy in the world as well as here at home.

Anarchy Defined. The condition of a society, entity or a group of people, or a single person which does not recognize authority. A leaderless society. 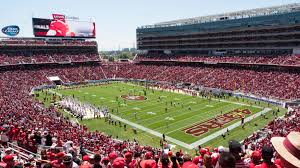 Certainly not the best season, but probably not the worst season either. I remember for years we used to lament, “Wait til next year”, and somehow next year never came. In the ’80’s and ’90’s we got serious. Montana and Walsh (92-59-1 with 2 Superbowls), Young and Seifert (98-30 with 2 Superbowls) showed us what football was all about. We were flying high in those days.

Mariucci gave us a decent 57-39 run; while Erickson, Nolan and Singletary gave less than stellar performances.

Jim Harbaugh, between 2011 and 2014 put up an impressive 44-19-1 effort before the tent collapsed and everyone jumped ship.

Jim Tomsula is left holding the bag, and it remains a mystery if he will hold that bag much longer. He is loved by his players, but does that translate into the win column on Sunday.

Hold your heads up high, Niner Faithful, THERE IS ALWAYS NEXT YEAR.