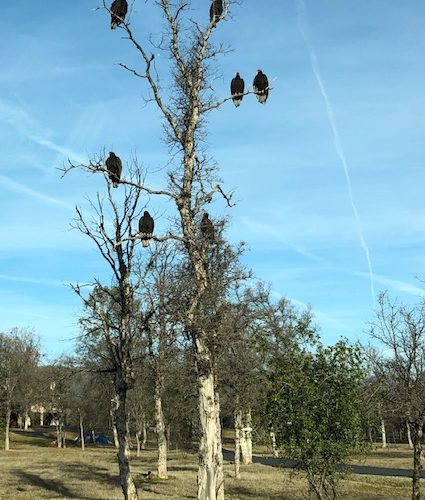 We were coming home from the gym, and these 7 behemoths met us at the corner of our Dead End street. We stopped our car dead in its tracks to take a hard look. They didn’t scare and take flight, but rather shifted from talon to talon, stretched their necks and wings and stared, beady-eyed out of their ugly little red heads. There was one on the ground that, coughed up something, pecked at it, and downed it again. He flew back up into the tree and took his place on a empty limb, and there they all sat. Never in my life have I seen a sight like this. I sat mesmerized, frozen and a little scared.

What did they forbode? Why were they there, all facing me, on my block, when there was all of California, Baja, Arizona and Utah to land in. “Are they waiting for me? Is this really a cruel joke? Are they even real?”, I found myself thinking. “Holy Smokes is this an omen? Is Odin or Thor calling me to Valhalla?” I cringed at the thought. “Did Edgar Allen resurrect, and is he here staging a photo for the cover of his newest novel?” My mind was going crazy. “Is that it? Am I going nuts? Do I start foaming at the mouth any minute now?”

The California Condor is a creature that has survived near extinction, soars like and eagle, does nothing to harm humans (live ones at least), and cleans up our roadkill. Sitting, staring at them I saw a palpable strength. I could feel it. Why were they roosting there? I also thought I saw a weariness in their demeanor. In the end I felt very blessed, privileged and finally happy to be in their presence. What an experience.

Your pose on your coming-out poster appears to be an emotional, ernest appeal to your would-be voters to see you as a sincere champion of the people, wanting nothing for yourself, and everything “For Our Country“. Kamala; the Lotus Flower, with purity of the body, speech and mind; the bringer of truth and clarity “For Our Country“. That was Day One.

Day Two was a different story. Full of yourself and your vast government experience, you strode upon the world stage and began what I assume is going to be a two year bashing of “Our Country’s President“, rather than initiating a rousing campaign to find the truth “For Our Country“. You made the comment (and I paraphrase); “Here it is Day 31 of the Shutdown, people are suffering and Trump is still embarked on his EGO (pet, signature, ?) Project to build the wall”.

Just for clarity’s sake, Kamala, Donald Trump began and ended his campaign with a tireless, energetic, whirlwind swing around, and around “Our Country” trying to understand what the people want from their President. He went everywhere, including “Our Little Part Of Our Country“, Redding, California. By the time he got to us he was rumpled and tired. Standing hunched over the podium, the Trump/Pence sign hanging askew, he folded up his envelope notes, stuffed them in his wrinkled coat and started speaking from his heart. He had heard from nearly all the people in “Our Country“, and laid out his promises. He knew that the rank and file was restless and aching to hear from him what is best “For Our Country“.  Fresh from the Kate Steinle murder, he announced what 63 Million American voters wanted to hear, he was going to secure the Southern Border. I, the first generation son of naturalized Danish-American immigrants, plus 63 Million voters, plus I’ll wager 30 Million Democrats, want a border that works, that protects us.

You have a very good chance of going far, Lotus Blossum, don’t squander your opportunity on party line. Live your mantra “For Our Country“. Lack or sincerity among the elected is wearing very thin, just ask Elisabeth.

Good Luck, you are going to need it.