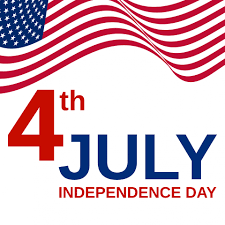 Of course Independence Day was the name we gave the day we fought for and won our independence from British Rule. Starting in 1773 with the Boston Tea Party, America’s first major act of defiance against the all powerful British King George III, the Thirteen Colonies began their ten year battle for self rule, ending in the Treaty of Paris, on September 3, 1883. The story of that ten year period defines who we are as Americans. Thirteen individual Colonies, with their individual alliances and allegiances, had to first come together, then fight a unified war for American soil, and then finish off all ties fighting battles on the high seas before independence was finally achieved.

Some 6,800 Americans were killed in action, 6,100 wounded, and upwards of 20,000 were taken prisoner. It is believed that at least an additional 17,000 deaths were as the result of disease, including about 8,000–12,000 who died while prisoners of war. There was a definite price paid for Independence.

Since  that time many Americans have fought and died to insure that we maintain our independence from all tyranny. Any threat to independence is a threat to the United States, because we stand for independence, we are the poster child for freedom from tyranny. The American flag is the symbol for that awesome, world wide responsibility, and as Americans we strongheartedly and willingly shoulder that responsibility.

Cherish your freedom and independence, revere the Flag, and all it stands for, and remember those who paid the price.