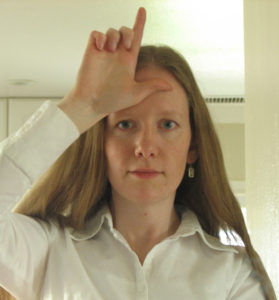 Movie celebrities and music celebraties, by definition, are successful, high profile people. They have earned a star in the firmament. I have nothing but respect for the efforts of Meryl Streep, Jennifer Lawrence, George Clooney, Sheryl Crow, The Dixie Chicks and others. They have entertained me, made me laugh, made me cry, and have put broad smiles on my face, while climbing their respective ladders of artistic success.

For some reason, however they seem to think that celebrity seems to somehow, translate directly to the political arena. All’s fair, and they have every right to use their bully pulpit to expound on whatever topics they feel are important to them. We all, somehow, seem to hang on their words and thoughts as if they were speaking to us only, the way that movies and songs seem to be acted and sung, just for us.

Sometimes, however, which is true of everyone, celebrities exceed their mental limitations. Either they are still acting, or singing when they promote politicians, or they just lose all sense of reality and overlook truth and conscience, to seek their goals of  “First Black President” or “First Woman President” or “Woman of the Year”. There has already been a “First Actor President”, but oddly enough celebrities didn’t support him.

I have noticed, over the decades, that celebrities are notorious losers and get it wrong all to often, when it comes to Presidential Nominee endorsement. I offer 1980 to 1988 and the last eight years  as proof of my assertion. 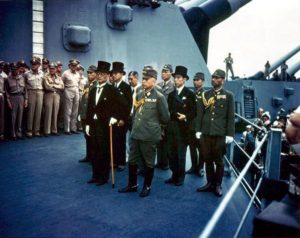 September 2, 1945, aboard the USS Missouri in Tokyo Bay

Progressive liberal historians are trying to rewrite history and paint the United States as the bad guys for the bombings of Hiroshima and Nagasaki, as witnessed by Obama’s recent trip to Nagasaki where he bowed and scraped and all but apologized to the Japanese.

September 2, 1945 is a day that most people today don’t remember, but I remember it like it was yesterday. WWII should have ended with the end of the fighting in Europe, and certainly should have ended April 1, 1945 when American Troops landed on Okinawa (next step Japan). At that time, the Japanese knew that the Allied Powers would eventually win the war.

Allied troops (American, Australian, British) were worn out and tired from four plus years of continuous, Pacific Theater, fighting and America wanted to bring it’s heros home and put an honorable end to hostilities, but the maniacal Emperor Hirohito decided to “Fight to the last man”, (and there were millions left). President Truman and Congress rightly decided that it was time to make the Kamakazi mentality Japanese see the light, and on August 6, 1945 dropped the Atomic Bomb (Little Boy) on Hiroshima. Truman again asked Japan to surrender honorably or suffer futher consequences. Hirohito stood by his “To the Last Man” orders. Three days later the Nitrogen Bomb (Fat Boy) was dropped on Nagasaki, and again Truman called for unconditional surrender. Astonishingly, it took TWO horrendous bombings for Japan to get the message.

Japan announced its surrender on August 15, 1945 and on September 2, 1945, boarded the USS Missouri for the surrender signing ceremony. Hirohito didn’t have the balls to show, and instead sent his Foreign Affairs Minister, and some minor dignitaries, in their funny little top hats, to sign the historic documents.

When remembering this day, take the time to get the facts straight. Don’t believe your liberal, abrogated, and distorted history books, the truth can be found elsewhere. Take the time to learn the truth about this great country of ours.

Note: Hirohito lived on in happy retirement until 1989 (44 more years). 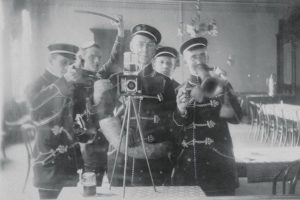 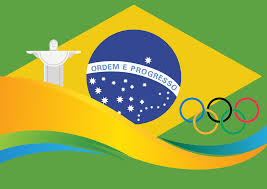 It always chokes me up a little when I see the American Flag raised at the Olympics when one of our stellar athletes wins the Gold. I suppose it is because when I was a boy, growing up, going through school, we said the Pledge of Allegiance every morning, and sang the National Anthem at the opening of school ceremonies and athletic contests. I remember saying and singing the words loudly and clearly with pride and a smile.

As our wonderful Team USA competitors stood on the podiums I noticed that about 90% placed their right hands over their hearts, but only about 10% actually sang the words to the anthem aloud. Many mouthed and mumbled the words, but very few sang with gusto. The tears came, and the eyes glistened and the smiles beamed, but the words, somehow got lost in the athletes throats.

Then on the second to last day of the Olympics, Neymar da Silva Santos Jr., kicked the final soccer goal, a shot heard round the world. As if that wasn’t enough, the stadium was treated to a historic medal ceremony. Each man received his medal, dutifully kissed it and bit it for the cameras, and then turned to face the three flags about to be hoisted for history. The teams from Germany, Brazil and Nigeria gradually settled down as the Brazil National Anthem began to play. The ensuing roar was deafening. To a man, each Brazil Team member sang to the top of his lungs, almost screaming, along with thousands of joyful fans, and followers; the Brazilian Nationals.

My heart rose with joy as I watched that marvelous spectacle. From the depths of recent depression; the back bending burden of political corruption, the doubts and touts of a world media that tried to cast a pall over the games, the voices of a proud people rose and drowned out the naysayers. What marvelous national pride, what unabashed joy, what perfect splendor. (Booing the opposition was a bit objectionable; another blog perhaps.)

What has happened to us America. Is it politically incorrect to show national pride? Is the ACLU so strong it can muffle the hearts and voices of patriots? Are we so down trodden; so beaten, so callous that we; the greatest country in history, the overwhelming winners of 121 Olympic Medals, the peddlers of democracy,  can’t sing our joy and praises with a similar spirit? What has happened? I want to know. 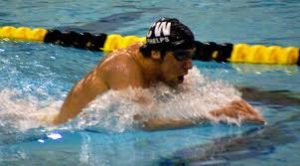 Mark my words, Michael Phelps will be back in four. How do I know this? I watched his performances and his interviews very closely and noticed a very strong dichotomy with a perceptible slant.

“I am happiest when I’m in the water competing.” “In 2008 and 2012 I was just going through the motions, this time I was involved.” “This was the first time I have ever participated in an opening ceremony. It didn’t ever occur to me that I would be nominated.” “This was the first time I was voted team captain.” “I really enjoyed myself.” “Mom said, ‘How about a 100 Fly and a Relay or two in Tokyo'”. “Boomer got to see me this time. He didn’t understand, but we will explain it to him when he grows up.” Remember the up-shot of the four Gold Medal medley relay swimmers with their arms around each other chanting “Four more years”.

Okay then. Here is an obviously wildly successful player in the Olympic Arena. He has a net worth of $55 Million which will probably double with his 2016 performance. He has a new life, and a new family. New reasons to move on, or new reasons to continue on. 31 is the new 21. Boomer needs to understand what he is looking at when he sees all those bubbles in the water. Mom and fiancé are already booking rooms in Tokyo. He ran away with the 2016 wins, only one win was close.

My daughter and a good friend are visiting Washington, DC and touring the various institutions. I told her DO NOT TOUCH ANYTHING, Liberalism is a virus, according to new medical studies. 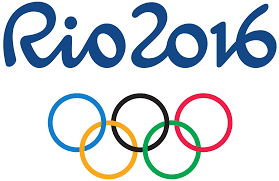 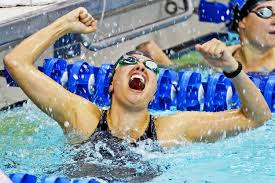 It was refreshing to see the nineteen year old Lilly King perform on the Olympic Stage, swimming the 100 meter breast stroke. She has obviously worked very hard to get to the Olympic podium, along with all of her clean team mates and it was wonderful to see her lead the way in voting against those who cheat in the athletic endeavor.

It wasn’t just finger wagging either, it was putting you mojo where your mouth is.

“We just wanted to show that you can be clean and win.” What a concept. Swin on Lilly. 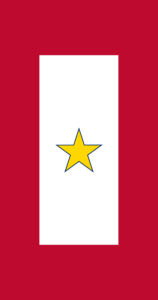 When I was a lad of five, it was 1942; the beginning of the United States heavy participation in WWII. Shortly after Pearl Harbor, images like the one above, began to appear discretely in windows in my neighborhood. I asked Mom and Dad what they meant and they told me, in respectful wispers, that the families who displayed the emblem had lost a son or a daughter in the fighting.

In 1943 I noticed more and more of these emblems and some of them had two stars and three stars denoting multiple family members, usually sons, lost their lives. I always looked upon this display with reverence and wondered what the families must be going through, and how they felt about losing a loved one. It must be terrible, I thought, I couldn’t stand it if I lost my cousin Evald or cousin Denny; both of whom, at the time, were fighting in the Pacific. They were both childhood heros to mine, who greatfully came home alive.

My family and I were so happy on September 2, 1945 when General McArthur, marched the Japanese Dignitaries to a table, aboard the USS Missouri, in Tokyo Bay and made them sign the unconditional surrender marking the end of WWII. My Mother took us to downtown Redwood City, CA, in our old Chevy, where we liberated one of the US Flags from a sidewalk pole and drove around the town screaming, cheering and yelling that the war was over. The senseless dieing was done.

A Gold Star Family is as sacred as the Alamo, Gettysgurg, Arlington Cemetery, The Vietnam Wall and every war memorial you can name. It is not to be defamed and it is not to be ridiculed or defiled (spoken ill of). Be very careful, anyone who does, it could be your undoing.